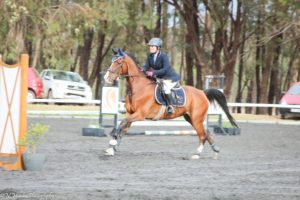 “2017 was a difficult year for me and Addition.

I had my shoulder surgery December 2016, got back on around March but still cautious. Work was also so incredibly busy and I was trying to rebuild my career after a change of industry. Had to make the difficult decision to let Cajun go end of June by which time I just decided to give up trying to compete in 2017. We did 3 training shows the entire year. What a great decision that turned out to be!

It gave me and Addition a chance to become even closer. Losing Cajun broke us. Adi lost his “mom” and safety blanket. I lost my heart horse. Everything changed.
The latter part of 2017 gave us the incredible opportunity to fix us. Slowly but surely my darling Addition became stronger. He started looking after me more and more. He was working like an absolute dream!

I decided 2018 was the time to get back to it, we got there eventually last week – back at Europa, one of my favorite venues (and close to home) – I thought that when we go back I will ease into it again but Addition made it VERY clear that these little jumps are boring. I knew what he actually wanted but I settled on going back at 1.10m. How did this happen? Oh right, my brave little horse that believed we can.

I walked away from that show feeling like I had won the lottery.

The jumping was actually the least of my worries, the trucking worried me – for those that don’t know, Addition and I had a horsebox accident 2 years ago. Whenever I load Adi I am a wreck and Adi isn’t very happy about it and we have had to do various things to try keep him comfortable. I decided to take a page out of his book and suck it up – I drove us. Adi was his usual nervous self but his Calm Mix always helps take the edge off.

In our first class Addition was cool, calm and collected – so much so that Jade asked me what was wrong because he was so together – we had one pole, didn’t even hear it fall.

The second class, a speed class, a stunning clear but too slow against the clock.

Thank you to Beryl and her amazing products for keeping us going even when we took a year off, my 15 going on 5 years old is looking and feeling better than ever!”