A recent post by a very respected scientist on Facebook got me thinking about science and cowboys and the nature of innovation.

Like many other things on social media, science has become a bit of a competition. We all want to be cleverer than, better than, more scientific than our peers. And what better way to do that than to loudly proclaim ‘lack of scientific evidence’ at every opportunity.

Sometimes, yes, it is true. And the way of science, the very definition of science, is to painstakingly test and restest minute variations of a theory until a clearer picture emerges.

And yet, it is my belief that rejecting ideas because of ‘lack of scientific evidence’ closes doors in the faces of curiosity and innovation. Nobel Prize-winning physicist Max Planck once described how “science advances one funeral at a time”.  This implies that scientists hold so tightly to their theories that only their death allows new thinking on the subject.

These things result in a scientific industry unwilling to take risks, even in small things like Facebook posts. And yet, often, big scientific breakthroughs need big, unscientific thinking. Here are a couple of examples:

Perhaps, we scientists should rather be encouraging adventurous musings on social media. Imagine the possibilities if people felt more free to share new, untested and seemingly illogical scientific thoughts without the risk of ridicule.

Social media also facilitates collaboration. It is far more likely, in today’s connected world, to find someone, somewhere who could supply the missing ingredient to your theory – the thing that lifts it out of theory into reality.

Now, more than ever, we should be sharing our ‘ridiculous’, ‘unscientific’, ‘unproven’ theories with the world.  Social media allows us the chance to investigate, collaborate and grow weird and unusual scientific ideas into new laws of nature, new realities, new medicines, new cures.

Let’s be brave, let’s be unconventional, let’s rock the scientific boat with snot and frog hearts. Let’s do big, crazy, magic, unconventional science. And, in addition, let’s be kind to one another while we do this. 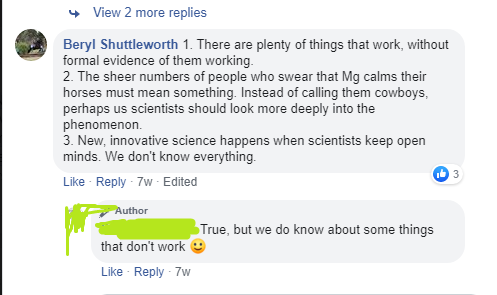