9th May 2018
Beryl Shuttleworth
No Responses 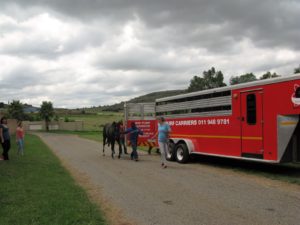 Yes, it has taken me a year, almost to the day to write this next update. Why? Because it was traumatic and because it happened because I made mistakes.

Castlewood, my new OTTB,  arrived on the morning of the 4th April 2017. He stepped off the truck very calm, but very interested in everything around him. We put him into the lungeing ring, well away from the other horses, to settle down. And, apart from a strange habit of swinging his head from side to side, he settled down nicely into sampling the grass.

After a couple of days in the lunge arena, I decided he should meet the other horses, so I let them all out together. The initial meeting went well, so I went back inside to do some work. At about 2 pm I left the house to fetch kids from school. That is when all hell broke loose.

I returned home to Cas being led inside by Garth. He had a huge section of skin peeled back from the saddle area with a big red raw triangle underneath. Only then did I notice Robyn, my sister’s horse, only had half a face! The bottom half of his jaw was hanging by a thread of flesh.

The horses had had a major fight, and somehow Robyn and Cas had been badly injured.

I won’t lie, I panicked. Eventually I located a vet who understood the urgency of the situation and arrived a few minutes later. (That’s another story all on its own…) She stabilised Robyn’s jaw while telling us that a broken jaw in horses was actually a fairly common injury and not difficult to fix. We hooked up the horsebox because she advised us to take him through to Witbos vet in Kyalami for surgery.

Imagine this –my daughter, Savannah and I, driving through rush hour Joburg traffic towing a horsebox with blood seeping under the door. Classy. 😉 We arrived an hour and a half later and left Robyn to the expert care that Witbos always provides.

In the meantime, our vet had stitched Cas up and left us a list of instructions for daily care in the months to come.

So this, friends, was why Cas wasn’t ridden for a few weeks after he arrived here. I could honestly kick myself for the mistakes I made. Introducing the horses too soon. Not being there for the entire first day. Not providing a dose or two of Calm mix to the entire herd before the introduction. Regrets.

But, like all Disney movies, it turned out fine in the end. Robyn healed completely, as did Cas. I was able to start riding after a few weeks and Cas settled into the herd with no further problems.