Dealing with a mare in heat

Having problems with your mare in heat? Is she sometimes an angel and sometimes a “mean girl”? If this sounds familiar, read on….

On average, your mare’s oestrus cycle will last about 21 days. The period where she is “in season” or “hot” is when she ovulates. Figure one shows the role that the hormones play in this cycle. 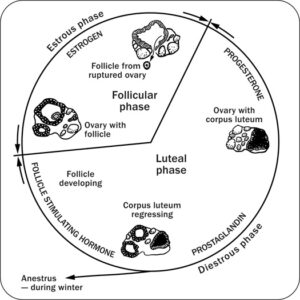 When she is in season (about 7 days usually), many mares show several changes in behaviour.  They will seek out a stallion and display their receptiveness to that stallion in various ways. They might be tender in places. Or they might be less responsive to the aids.

Some mares, however, show extreme changes in behaviour during their season.  Aggression, stallion-like behaviour, bucking, kicking, biting etc. are all symptoms of how some mares respond to these hormonal changes. This sort of behaviour can become dangerous.  It is with these girls in mind that I decided to work on a Mare Mix.

I’ve used a natural anti-inflammatory called Boswellia Serrata. Several studies have found this herb to be a very effective anti-inflammatory and painkiller.  Although no-one seems to have tried it specifically for this problem, I had a feeling it would be the best herb to use.

Hormonal imbalances in your girl

I’ve used two herbs in Mare mix which are effective in treating hormonal problems. The first is Chaste tree berry (Agnus castus).  Agnus castus works by suppressing the release of prolactin, which plays a role in several menstrual problems, such as irregular cycles, pain, infertility. The second herb in this section is so effective, but so rarely used, that I have decided not to mention what it is. Don’t worry it is completely safe.  It is a widely used herb for other applications, but no-one seems to have used it in products for hormonal problems, despite the wealth of evidence supporting this use.

Moodiness in your mare

Then I have added several natural remedies that positively affect mood:

So does it work?

Trials with this product were very, very positive.  Read more about Mare Mix here and see some of the customer comments 🙂 If you want to buy some you can also do that here.