Rooibos and horses and unexpected things

I’m a believer that things happen for a reason and thanks to Douglas Adams in the interconnectedness of all things.  I am, however, not always all that quick to connect the dots, but luckily I grew up with horses and in their wonderfully unique way, I have found that horses often help me join those dots in interesting and exciting ways.  I also enjoy telling stories and I hope you’ll enjoy the story behind our Rooibos product.

My family have farmed in the Cederberg since the late 1800’s, mainly focussing on citrus fruit and the rooibos tea that grows indigenously on the surrounding mountains and that the area is rightly famous for.  Rooibos can be an acquired taste – I think it tastes and smells vaguely of fresh hay – although I appreciate that that appeals more to some than to others!  It has long been used as a home remedy for soothing colicky babies, adult tummys (black rooibos tea and dry toast with Marmite) and it has saved many of the local cattle when they get sick (ask Hedley for the remedy).

My dad is a keen racing man and I was lucky enough to grow up on a small stud and summer holidays were spent on our horses, playing pony tag with our friends up and down the Olifants River.  Of course, there are few of us with unlimited funds and if you breed horses, sooner or later you generally have to sell them.  Homing horses is probably one of the hardest bits of the job and as a rule I don’t like to do it (which can be seen by the fact that I own too many and will probably never be wealthy in material things, but will always be rich in horsehair and muddy boots).

One day we had a little horse coming off the track.  He was a special horse and needed a special home, but counting against him was the fact that he was a little on the small side.  As it happened, a friend mentioned someone in Joburg who was looking for a horse – Beryl Shuttleworth.  One 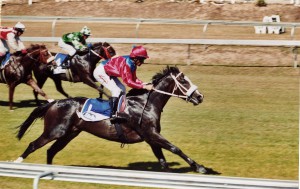 doesn’t just give horses away – even to people who do make wonderful products for horses and so I approached the situation delicately.  Beryl confirmed that she was indeed looking for a horse, but already had something fairly firmly lined up.  However, I detected a hesitation.  When I nudged gently, she admitted that I’d think she was mad, but that all along she’d had a picture in her head of her new horse and, well, the one she had lined up wasn’t it.  The thing was that the horse in her mind was a dark bay with a blaze.  Which was exactly what my little horse needing a home looked like.  Not wanting to mess it all up, but not wanting Beryl to miss out on the horse in her head, I had to be honest and tell the truth.  And as so often happens, it all turned out well, ‘my’ horse turned out to be Beryl’s horse after all and so not only did he get a new home, but I gained a new friend.

I hadn’t considered rooibos for equine use until I acquired a little Thb named Sarge.  Sarge is terribly sweet and nice and did me proud on the racetrack, but he retired from racing and his first summer as a riding horse rolled ro 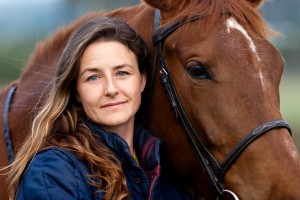 und, he developed the most terrible skin condition.  I treated it with everything possible until a friend recommended rooibos tea.  I didn’t know an awful lot about its antioxidant properties at the time, but was at the very last fibre at the end of my tether and decided to give it a go.  And when it worked I was about as surprised as anyone – as well as being more than a little sheepish for not knowing that the remedy I needed was – quite literally – growing right under my nose!

As Beryl is my cleverest friend when it comes to designing healthy, holistic things to help horses, I rang her up to discuss it, she did the sort of analysis and research that clever scientist people do and found out that rooibos tea is good for so much more than just helping itchy skins and by the end of it we were so excited about the tea that we wanted to share it.

While it may be a little too much to hope that a package on a shelf will change your life in interesting and unusual ways, what we can tell you is that it is a 100% natural, indigenous product, grown on a small family concern in the Cederberg and it is based on two of the very best things in the world – horses and the friends they bring you.  We hope you enjoy it as much as we’ve enjoyed making it for you.