Sweet Itch in horses – would a natural remedy help?

Sweet Itch in horses is caused by an allergic reaction to bites from the Culicoides biting midge. 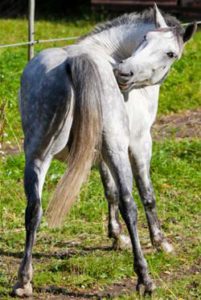 (There is another rarer variation (occurring on the neck and belly midline) which can be caused by a parasite, Onchocerca, but we aren’t dealing with that here.)

How do you deal with this problem? My suggestion is a multi-pronged approach:

Your normal fly sprays probably aren’t going to help keep the midges at bay here. Rather use Eucalyptus oil diluted about 100:1 in water. You can also cover the effected spots with a heavy cream or Vaseline. (For even better results add a bit of Chamomile tincture to your cream or Vaseline.)

Invest in one of those sweet itch rugs to prevent further bites.

Feed one cup of Linseed or Chia seeds for the Omega oils, which have been found to help Sweet Itch in horses. Contrary to popular opinion, you can feed Linseeds whole, unsoaked and uncooked.

This is what I’ve tried to do with Itch mix, with regards to Sweet Itch in horses:

In an allergy, the very first thing that happens is that the horse’s body reacts to the allergen (Culicoides saliva) by making mast cells burst open and release histamine (which causes redness and itching) and cytokines (which cause inflammation).

Amazingly, the best way to halt this reaction in its tracks is to use various natural substances – Spirulina, Citrus Bioflavonoids, Rooibos, and Vitamin C. These natural substances work better than any drug on the market to stabilise the walls of the mast cells, preventing the release of cytokines and histamine. This, in turn prevents the swelling, itching and redness.

Certain minerals, if deficient in the diet (and this is not uncommon), can cause your horse to be more prone to developing allergies such as Sweet Itch. These minerals are Magnesium, Copper and Zinc. So, I’ve added them here, in a bioavailable form, to make sure that a deficiency doesn’t happen.

One of the biggest problems with Sweet Itch is that the horse becomes insane with itchiness and will scratch to the point of bleeding. These sores then often become infected, making the whole problem even worse.

Echinacea purpurea helps the white blood cells get rid of disease causing bacteria. It does this by literally increasing the ability of phagocytes to ‘swallow’ foreign bacteria.

Melchart, D., et al. “Results of five randomized studies on the immunomodulatory activity of preparations of Echinacea.” The Journal of Alternative and Complementary Medicine 1.2 (1995): 145-160.